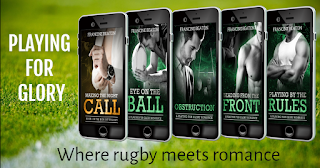 It is often said that “rugby is a hooligans’ game played by gentlemen.

To the uninformed, it may appear that way. It is, a full-contact sport of near-seamless action, constant energy, with frequent collisions where players wear little-or no protective gear. It can get bloody and messy.

Professional rugby is tough. There are only fifteen positions in a team, and the competition is hard. The tough guys at the top have worked for years to get there. They suffer disappointments, injuries, rehabilitation and waiting for their chances, but it taught them plenty about mental strength and the value of fierce commitment. Those are traits I deeply admire.

There’s no denying though that rugby players rank among the sexiest athletes in the world. They often frequent the front covers of magazines, in calendars or ads ranging from shower gels to underwear. All shirtless and often in skimpy enough underwear to show off their bodies, toned from years of physical training, hard work and the fierce physicality of the game.

Their bodies, however, is not the only thing that attracted me to the game since I was a young girl—and that was even before I got to the age where boys were me. There was something about the free-flowing game featuring a combination of strength, speed and strategy when moving the ball across the pitch that had intrigued me and still does. I must confess. I am an avid supporter of my local team, and I follow them diligently. If I get a chance, I even watch them train. I’ll get up in the early hours of the morning to watch a game or stay up late, and if I’m not at home or a place to watch the game live, I’ll follow the game live on social media.

Maybe years of following rugby and the increasing popularity of the game, especially since the shorter form of the game, the Sevens, had in the Olympics, had been the inspiration behind, or the reason for the series, Playing for Glory. When you meet a fellow rugby enthusiast on a boat cruise on the Hudson during the Fourth of July celebrations, there had to be a reason such a meeting made an impression. It was only on the long flight from New York to Johannesburg that the series started to form. Before then, I never considered writing about my beloved sport, not even romances.

The Playing for Glory series tells the stories of red-hot players and the women they love. Each character has a different story, dealing with sensitive issues such as teenage pregnancies, work ethics, and unforbidden love. Between all the , rugby is the one thing that keep my characters together. books are steamy and some are clean, but it was what the character wanted. And they all get their Happy .

So, if you are looking for a rugby series to put you in the mood for the Rugby World Cup, this is your chance.

THE PLAYING FOR GLORY SERIES
EYE ON THE BALL (PLAYING FOR GLORY, #1)
What would prove to be stronger? Love, or loyalty?
It is a World Cup year and top professional rugby player, Jakes Plessis, desperately wants to fulfil his childhood dream of playing for the Springboks. To succeed, he must stick to the team’s strict vow of celibacy and mantra: ‘Focus! the balland stay away from women.’
A chance meeting with artist Angie Summers throws his well-laid plans into a tailspin. Not even his promise to his friends and teammates, over 9 000 miles between them, and demons from his past can stop Jakes from falling for her.
But life is not plain sailing, and Jakes discovers that it takes a team to help him overcome the obstacles that stand in the way of his own Happily Ever After.
When Angie meets Jakes, it is not love at first sight. She is not looking for a new relationship; still wears another man’s ring.
Fate has different ideas though.
Can Angie forgive Jakes and forget about their first disastrous encounters? Will he let her into his heart to overcome his biggest enemy, which is not on the field of play?
https://amzn.to/2TiIFDj

OBSTRUCTION (PLAYING FOR GLORY, #2)
Everyone deserves a second chance...
There is a fine line between love and hate. spots Riley Adams, his first love, at the Buffaloes’ first press briefing of the year. He cannot allow her back into his heart that she broke seven years ago. Or can he?
Riley does not have the luxury of hating or avoiding Christopher. Their lives forever. Her is to confront him before he discovers her secret through someone else. And when he knows the truth, will Christopher hate her even more or will he be willing to forgive?
Obstruction, is the second standalone sports romance in the Playing For Glory series, it follows the lives of red-hot professional rugby players and the women they love.
https://amzn.to/2Hm1SC2

LEADING FROM THE FRONT (PLAYING FOR GLORY, #3)
Temptation can come in any form.
As long as it didn’t come in the form of Melissa Roux—a feisty blond with long, shapely legs. She spelled trouble and Daniel Cooper knew that from the moment he laid eyes on the new physio for the Buffaloes rugby team. As captain, he had to set an example and falling head over heels in love wasn’t the way to do it.
Melissa knew Daniel be a problem from the first day on the job. There was no way she risk her career for an arrogant chauvinist who called her a blonde bimbo. She had worked too hard to get her dream job.
Neither of them could deny the undeniable chemistry between them, or the famous Cooper curse. When Daniel made one simple request, it had unexpected repercussions. In his quest to find the truth, he made another error in judgement, risking not only Melissa’s career but also the loyalty of his team and the Club.
Daniel and Melissa both faced a decision: What’s more important? Your career or love?
https://amzn.to/2TLBbZd

PLAYING BY THE RULES (PLAYING FOR GLORY, #4)
“If you know what’s good for you and your career, stay away from my daughter!”
Ulrich wants to play rugby for the Buffaloes and the Springboks and eventually become the best chef in town. In that order. There is no place for romance in his life. Obeying Coach Brady’s command is until he meets his daughter Samantha. She is everything he needswarm, bubblyand possibly, the missing ingredient he lacks to spice up his life.
Sammy is a professional athlete and she too knows the rules. But it is hard to resist Ulrich’s quiet strength, focused determination and, most of all, his delectable kisses.
Both know how to fight for what they want. But as their desire for each other intensifies, so does the pressure to make a choice. Can Ulrich and Sammy continue to play by the rules or risk it all for love?
https://amzn.to/2VHncsH

MAKING THE RIGHT CALL
One chance. One choice. It’s his call.
Nicholas Carter is the billionaire owner of the Wild Dogs, a young and successful rugby club. His secret to success is simple; keeps his business and his private life separate. That resolve when Emma Cole comes into his life. His new accountant is not his type, yet she has the uncanny ability to make Nicholas lose control.
Geeks shouldn’t look like Nicholas and neither should they kiss like he does. to discover that the hot, sexy, green-eyed man with intoxicating kisses is her new boss.
They cannot deny the attraction between them. But giving in to the chemistry spells serious repercussions. During a business trip they surrender to their and embark on an affair that changes their lives forever. to . Will he take ownership of the resulting fallout? Will he make the right call?
https://amzn.to/2O6wsma 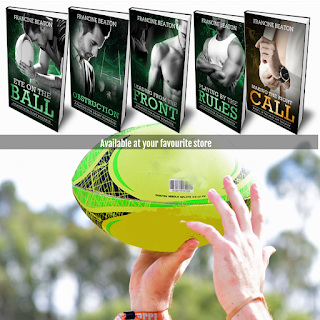