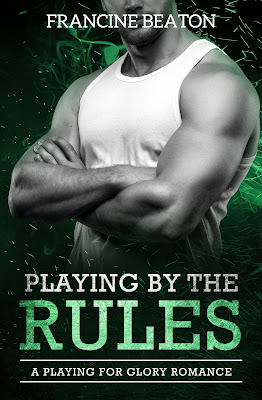 “If you know what’s good for you and your career, stay away from my daughter!”
Ulrich wants to play rugby for the Buffaloes and the Springboks and eventually become the best chef in town. In that order. There is no place for romance in his life. Obeying Coach Brady’s command is easy until he meets his daughter Samantha. She is everything he needs—warm, bubbly—and possibly, the missing ingredient he lacks to spice up his life.
Sammy is a professional athlete, and she too knows the rules. But it is hard to resist Ulrich’s quiet strength, focused determination and, most of all, his delectable kisses.
Both know how to fight for what they want. But as their desire for each other intensifies, so does the pressure to make a choice. Can Ulrich and Sammy continue to play by the rules or risk it all for love?


Playing By The Rules, is the fourth standalone sports romance in the Playing For Glory series, it follows the lives of red-hot professional rugby players and the women they love.
https://amzn.to/2VHncsH
https://books2read.com/u/3kvdWN

OTHER BOOKS
PLAYING FOR GLORY SERIES

What would prove to be stronger? Love, or loyalty?
It was a World Cup year, and top professional rugby player, Jakes  Plessis desperately wanted to fulfill his childhood dream of playing for the Springboks. However, to succeed, he must stick to the team’s strict vow of celibacy and mantra: ‘Focus! Keep an eye on the ball—and stay away from women.’
What Jakes didn’t count on was a chance meeting with Angie Summers, an artist who shook him to his core and threw his well-laid plans into a tailspin. Not even his promise to his friends and teammates, over 9 000 miles between them, and demons from his past could stop Jakes from falling for Angie.
Unfortunately, not everything is plain sailing, and Jakes finds it takes a team to help him overcome obstacles to find his way to his own Happily Ever After.
When Angie stumbled upon Jakes by accident, it definitely wasn't love at first sight. She wasn't looking for a new relationship, she was still wearing another man’s ring.
Fate has different ideas though.
Can Angie forgive Jakes and forget about their first disastrous encounters? And will he let her into his heart to overcome his biggest enemy, which is not on the field of play?
https://amzn.to/2TiIFDj
https://books2read.com/u/4EDwaE

Everyone deserves a second chance...
They say there is a fine line between love and hate. When saw Riley Adams, his first love, at the Buffaloes' first press briefing of the year, he still hated her with a passion for breaking his heart seven years ago.

Temptation can come in any form.
As long as it wasn’t Melissa Roux. Daniel Cooper had known that since the first moment he’d seen the new physio for the Buffaloes. As captain, he had to set an example and falling head over heels for the feisty blonde with the endless long legs, wasn’t the way to do it.
Melissa knew Daniel  be a problem from the first day she walked into Buffaloes Stadium. There was no way she  risk her career for an arrogant chauvinist who called her a blonde bimbo. For that, she worked too hard to get her dream job.
Neither had reckoned with the undeniable chemistry between them and the famous Cooper curse. When he couldn’t hide it anymore, Daniel made a simple request which had more repercussions than he expected. In his quest to find the truth, he made another error in judgement, risking not only Melissa’s career but also the loyalty of his team and the Club.
Daniel and Melissa both had to make important decisions: what’s more important? Your career or love?
https://amzn.to/2TLBbZd
https://books2read.com/u/ba0qVx

One chance. One choice. It’s his call.
As the billionaire owner of the Wild Dogs, a young and successful rugby club, Nicholas Carter had kept his business and his private life separate. That was until Emma Cole came into his life. His new accountant was not his type. Emma had the uncanny ability to make Nicholas lose control.
Geeks shouldn’t look like Nicholas and neither should they kiss as he did. Emma didn’t expect that the hot, sexy, and sweaty green-eyed man who kissed her senseless on the stairs was her new boss.
They couldn’t deny the attraction between them. Giving in to the chemistry could have repercussions. During a business trip they gave in to their attraction, embarking on an affair that would change their lives forever. Life happens, and reality crept into their relationship. It forced Nicholas to decide. The resulting fallout was nobody’s fault but his own. He knew it was his call.
https://amzn.to/2O6wsma
https://books2read.com/u/4DZ2ag

Never trust a man who doesn’t like coffee.
Kirstine Brown does not heed her grandfather’s advice and lets billionaire businessman Iain Young get under her skin. But what Kirsty won’t stand for is losing Joe’s Coffee House–her pride and joy. It is all she has.
Iain inherits Court, a building in the heart of Edinburgh’s Leith district, and a stubborn tenant who refuses to move. Kirsty has an iron-clad contract, but to winning and sets out to change her mind.
He gets more than he bargained for and falls hard for the blonde barista. Knowing that only a big gesture will convince a suspicious Kirsty of his growing love for her, he waits for the perfect moment.
But secrets cause misunderstandings. Throw in an ex who wants him back and a greedy employee who sabotages Kirsty, and Iain has his work cut out for him.
Will Iain’s gesture be too late to win Kirsty’s heart?
https://amzn.to/2UNR1m4
https://books2read.com/u/4jDE0l

A brief interlude just before to be more than that. That was what Nathan Sinclair imitated to Meghan Carstens when they said goodbye and she believed him. She should have known it was a lie and that he would end up just like all the other assholes she had dated before. When they met again a few months later, Meghan accepted it was over. Nathan ignored her as if the time they spent together on Twin Peaks, had never happened. She did the same, even though it hurt.
Meghan belonged to an industry Nathan abhorred. Apart from his mother and his sister, he had vowed long ago never to have anything to do with someone who had aspirations to be a model, designer or a journalist. He had once too often. Why then did he feel this compelling attraction to the sultry fashion designer?
When the truth emerged, would Meghan be willing to give Nathan another chance?
https://amzn.to/2TtksK3
https://books2read.com/u/mg0w6z

They might be andsister, but there was no sibling love between Marcus Walker and . Marcus made sure of that and paid the price. Annie spent five years in exile in New York. Her family thought she lived the high life with her husband. When her marriage ended, Annie and her daughter returned to Blue Mountain to heal. Eleven years had been long enough to hold a grudge. Seeing Annie again for the first time since her marriage had been a shock. Marcus just picked up the pieces of his life after his wife passed away. He wasn’t ready to deal with Annie. Not that it mattered. Annie ignored him. Marcus stayed in the background until Annie healed. When she did, Marcus was there. Then her ex-husband returned. Have they lost their piece of heaven on Blue Mountain?
https://amzn.to/2B8mUOZ
https://books2read.com/u/mqGn61

Adam Walker feels like an outsider in his close-knit family and it is his own doing. For years he has hidden a secret from them. How can Adam confide in any of them when revealing his guilty pleasures will tear them apart?
Nicola Evans arrives on Blue Mountain as the new marketing and events coordinator. She has a secret of her own. Yet, the woman with the pixie haircut and forest-green eyes does what no one else has done - chip through all of Adam’s defences. Nicky is a temptation he cannot resist.
But secrets cannot stay hidden forever. The truth always comes out. And when Adam faces the biggest challenge of his life, Nicky has a choice to make. Stay on to help him or leave with her secret intact.
Will Nicky risk it all to help Adam break free from the chains of his past once and for all?
https://amzn.to/2GUgtm1
https://books2read.com/u/3ygdne